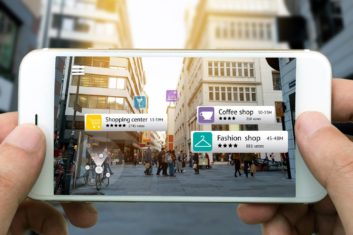 Virtual reality (VR) is a virtual experience that can be similar or completely different from the real world. VR is commonly used for entertainment and educational purposes. Distinct types of VR technology include augmented reality (AR) and mixed reality (MR) that can be operated on similar devices.

How Does VR Work?

VR works similar to Augmented Reality (you can read about AR here) in the sense that both create items virtually and present them to users on their preferred viewing devices. However, unlike AR, VR creates entirely new worlds rather than placing select virtual items in the real world.

Virtual reality technology empowers creators and users alike to do the impossible– things that would be considered too dangerous, too difficult, or too expensive to do in real life. This could range anywhere from taking people to the moon without the cost (too expensive), allowing users to interact in a horror setting (too dangerous), or building an entire city on your own (too difficult).

Creating effective VR content can be tricky if you don’t have the right tools, but fairly simple if using any of these reputable toolkits, or others that are available:

Since Virtual Reality applications deal with inserting a viewer into a virtual world, there’s specific equipment that is required to make sure the apps run smoothly. This includes VR headsets and VR-ready computers.

Some examples of a VR headset include: Vive, Oculus, and Windows Mixed Reality.

Planning on Launching Your VR App?

VR tools like the ones listed above can help build your virtual reality app to meet your expectations. However, managing and creating VR content can be difficult because quite a few things are required– finding the right VR developers, obtaining IT infrastructure, forming a development approach, and managing the projects, to name a few.

VR programming can be strenuous if not handled by the right people, so it’s highly recommended that you hire a reputed software development company for related projects. Skipfour is one of the fastest growing AR/VR development companies in the US. Our VR apps and the content we have generated for the customers is being used in retail, healthcare, gaming and many other domains.

Why Skipfour For Your VR Project?

Skipfour specializes in AR/VR ecommerce, realty, fashion, mapping and retail solutions. They have completed various VR related projects, all the while meeting customer requirements and completing the projects with utmost care.

Skipfour prides themselves with high quality performance that not only covers the bare minimum assigned by the customer, but also goes above and beyond customer expectations. Client satisfaction is a top priority for the company, followed by rigorous work and thorough project completion.

Whatever the project, Skipfour will make it everything you hoped for!

Ready to start working with Skipfour? Contact them here.